All the debauchery you asked for- because I love you

Mardi Gras tried to kill me.  I survived, powered by your tweets.  I survived for you.  Because you sent me on missions with your picture requests from Mardi Gras so it was like you were there, but without the insanity, smell of stale beer and urine, and the mandatory hang over.  Basically I took a hit for you and now you owe me.

But face it you are here to see if I was able to get all the different pictures everyone requested.
I had so many photos I had to split it between both blogs.  So make sure to go and look here for more at BeingPeachy 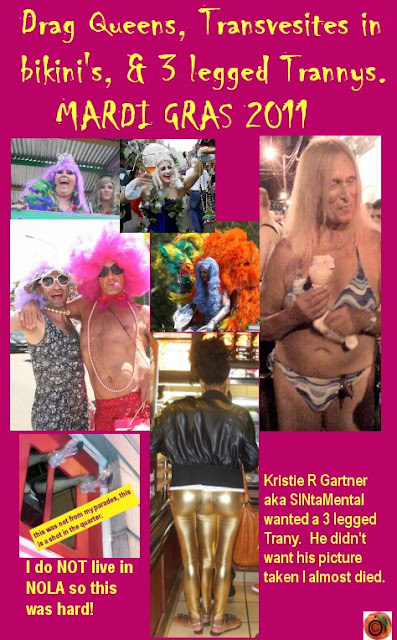 Drum roll for the boobs as per requests- 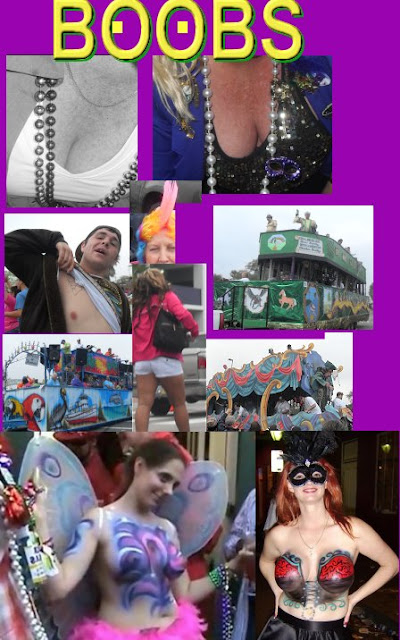 What is Mardi Gras without some drunks, and hitting on a cop? 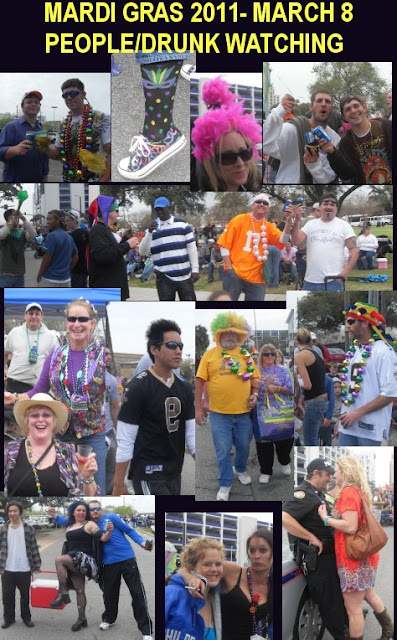 My  youtube channel is slammed at BeingPeachy but here are some drinking party videos.

and  as per your request for the impossible,  the Johnny Depp, Alexander Skarsgard, Matthew, Harry, and Me shot to which I could not leave out my boyfriend Brendan.

I had so many photos I had to split it between both blogs.  So make sure to go and look here for more at BeingPeachy

It's Mardi Gras here. That means EVERYONE is off work for Fat Tuesday which is actually the day of Mardi Gras, but we really stretch it out because it's a season. Literally months and months have went into excessive celebration.  Because we are approaching ash wednesday.  Yes people this is actually a religious holiday but no one EVER protests the drinking, the boobs, the luxury of this season.  They just think it's a party.  And that's totally fucking OK with us.  Seriously, everyone is welcome.

Oh yeah and don't correct my title, I know it's not proper french, you are absolutely correct, it is a grammatical affront to all French people.  However it is a lovely blend of Slov and French and Spanish because we have flown under so many flags, this is "our" way to say-  "let the good times roll.

Also I made this, for a custom order.    It's solid chocolate, all of it, and drunks will eat the hell out of it.
NOM NOM NOM NOM NOM 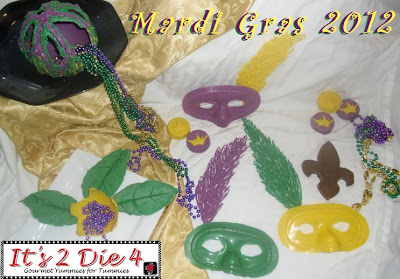 Over indulge, after all remember what the Myans said !
XO
PEACH OUT
Posted by ThePeachy1 at 10:37 AM 2 comments:

You better be freaking kidding me.

Kathleen Robertson of Austin, Texas was awarded $80,000 by a jury of her peers after breaking her ankle tripping over a toddler who was running inside a furniture store. The store owners were understandably surprised by the verdict, considering the running toddler was her own son

Carl Truman, 19, of Los Angeles , California won $74,000 plus medical expenses when his neighbor ran over his hand with a Honda Accord. Truman apparently didn't notice there was someone at the wheel of the car when he was trying to steal his neighbor's hubcaps.

Terrence Dickson, of Bristol , Pennsylvania , who was leaving a house he had just burglarized by way of the garage. Unfortunately for Dickson, the automatic garage door opener malfunctioned and he could not get the garage door to open. Worse, he couldn't re-enter the house because the door connecting the garage to the house locked when Dickson pulled it shut. Forced to sit for eight, count 'em, EIGHT days and survive on a case of Pepsi and a large bag of dry dog food, he sued the homeowner's insurance company claiming undue mental Anguish. Amazingly, the jury said the insurance company must pay Dickson $500,000 for his anguish. We should all have this kind of anguish Keep scratching. There are more...

Double hand scratching after this one..

Jerry Williams, of Little Rock, Arkansas, garnered 4th Place in the Stella's when he was awarded $14,500 plus medical expenses after being bitten on the butt by his next door neighbor's beagle - even though the beagle was on a chain in its owner's fenced yard. Williams did not get as much as he asked for because the jury believed the beagle might have been provoked at the time of the butt bite because Williams had climbed over the fence into the yard and repeatedly shot the dog with a pellet gun.

Pick a new spot to scratch, you're getting a bald spot..

Amber Carson of Lancaster, Pennsylvania because a jury ordered a Philadelphia restaurant to pay her $113,500 after she slipped on a spilled soft drink and broke her tailbone. The reason the soft drink was on the floor: Ms. Carson had thrown it at her boyfriend 30 seconds earlier during an argument. What ever happened to people being responsible for their own actions?

Only two more so ease up on the scratching...

Kara Walton, of Claymont , Delaware sued the owner of a night club in a nearby city because she fell from the bathroom window to the floor, knocking out her two front teeth. Even though Ms. Walton was trying to sneak through the ladies room window to avoid paying the $3.50 cover charge, the jury said the night club had to pay her $12,000....oh, yeah, plus dental expenses. Go figure.

This year's runaway First Place Stella Award winner was: Mrs. Merv Grazinski, of Oklahoma City, Oklahoma, who purchased new 32-foot Winnebago motor home. On her first trip home, from an OU football game, having driven on to the freeway, she set the cruise control at 70 mph and calmly left the driver's seat to go to the back of the Winnebago to make herself a sandwich. Not surprisingly, the motor home left the freeway, crashed and overturned. Also not surprisingly, Mrs Grazinski sued Winnebago for not putting in the owner's manual that she couldn't actually leave the driver's seat while the cruise control was set. The Oklahoma jury awarded her, are you sitting down?

$1,750,000 PLUS a new motor home. Winnebago actually changed their manuals as a result of this suit, just in case Mrs. Grazinski has any relatives who might also buy a motor home.
Posted by ThePeachy1 at 9:48 AM 6 comments:

Email ThisBlogThis!Share to TwitterShare to FacebookShare to Pinterest
Labels: insane court cases, stellas 2011, the pits of being peachy

It's pretty much a proven fact that most grown adult nearly sane women can look at their past and think, " OMFG what the hell was I thinking?"

It may have been a boyfriend, or god forbid a husband.  It's a paradox, it seems that a nearly sane moderately intelligent woman wouldn't be caught dead in the company of such a piece of breathing shit.  However we often date, or mate with them during our younger years.

I have solved the mystery.  You are welcome.

1) most of the grown nearly sane moderately intelligent women were raised in a household of dreams and dolls.  O' wait that's only in the fucking movies, most of us were raised in houses of divorced fighting parents or worse parents who should have been divorced because one of them was such an intolerable cunt that you felt pity for the other one.  However no matter the household situation you were raised in I am sure there was some sanity and love,  even if it was a brief glimpse or just your childlike rose colored glasses making it possible for your psyche NOT to split 30 ways and we go around pulling out puppies eyes and sewing them to our stuffed animals.  With the knowledge of this as our basic foundation I will move on.

2- Early interaction with the opposite sex.  Preschool,  a parents friends child, Kindergarten whatever it was.  You can bet nearly every little girl remembers that asshole kid that kicked you, threw things at you,  called you some horrible name that possibly rhymed in some weird kid way. Chances are if this little asshole pulled your braided pigtails or hit you with a spit ball.  You were already at a disadvantage by having to wear days of the week panties and skirts and those god awful freaking shoes.  The bonus?  Those shoes were some hard ass "mary janes" and the childhood equivalent of steel toed boots.  Thankfully we as women were born with  remarkable accuracy when we fought back it was more like a strategic nuclear strike to the still forming nuts of the rat bastard torturing us.

3-Movies.  Yes we love Beauty and the Beast, where the beautiful woman sacrifices everything looks past everything,  both physically and emotionally  to fall in love with a seriously violent and ugly asshole.  Who the hell thought that was a great idea?  I mean do we have a reverse of this to balance out the entire " see the best in everyone " mantra.   Maybe?  How about "Lady and the Tramp",  OMG, yeah they are dogs, but she runs away with a bad boy homeless dog who treats her to leftovers on a garbage can.  They fall in love, she looks past the fact he has a criminal history, no home, no family,  and basically no morals, and then they move in with her parents.  Wow, that is freaking awesome. I don't have to go into the overtly obvious ones like dirt poor Cinderella has to pretend to be "good enough" for the guy,  or Snow White where it's totally ok to run away and live with a bunch of guys because you think your parents are assholes.  Wait Asshole parents?  That sounds like Ariel, because her dad had all these stupid "rules" like DON'T FREAKING TALK TO THE PREDATOR that lives in a cave.  Make a deal with the local predator and go try to be good enough for the guy because he's cute and your Dad is an asshole with rules.  Thanks childhood cartoons for putting this shit in our heads.


Honestly I watched and read them all.   I knew I needed to find a destitute bad boy and I could totally look right thru the physical and emotion and financial parts because none of that matters once you love him enough he will be perfect and things work out great.

UTTER FUCKING BULLSHIT.  Yet a large portion of females do this.  Especially in our youth.  I would like to say that our frontal lobes aren't completely formed when we do these things.  I would also like to say we learn our lesson and run straight into the arms of a wonderful man or find our own happiness that doesn't even involve being "good enough"  or "tolerant enough"  just to be who we are, how we are, and tell the world to take it or leave it.

There's a lot more to this and you could write a thousandkabillion  Doctorate Thesis on this topic.

Why bother,  every teenager is automatically smarter and has stronger feelings and unique experiences that their parents just can't comprehend because they are old.  They got old by being a teenager and they are praying that you don't do the same stupid shit they did.  Or they are drunk.

I need a fucking drink.