I will cut a bitch 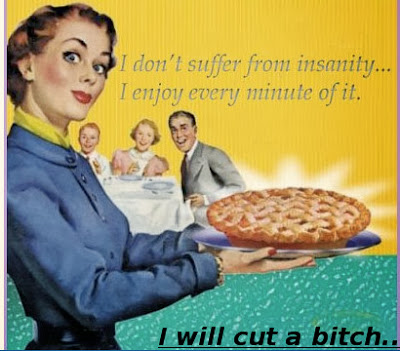 Sometimes I make a cake or pie for no special reason other than the wonderful smell and the fact I know someone will smile when I offer them a piece ( or 2).

One of the best parts of making pies, is sharing them.  I love to share my pies.  I will share an entire pie, not even keeping a slice for myself.  It's easy for me to make a pie, maybe not so easy for them.

However.   I will not have anyone  break into my house and steal my pie or even a piece of it.  I will stab them with a batter beater, or shoot them with a deadly spit ball fired at lightening speed.

Seriously,  I will make pies if I have ingredients and time and skill,  and I will give them to family, friends, strangers and give the whole pie or the last slice.  But don't fucking tell me who get's my pie.

If you can see the logic behind the above Pie story.  I hope with all my heart you understand exactly what is happening in our country.

You work for the money to buy the ingredients,   you work to bake the pie, and then, in front of your face, a stranger will walk in and take then entire damn pie.

It could be a murderer or a drug dealer, or a construction worker turned rouge burglar since jobs are short, and frankly just walking in my house and taking the pie without permission is a helluva lot easier than  carrying a kabillion tons of shingles up and down a ladder in the blazing sun.  Stealing the pie so much easier.

So we change the law so that it's no longer illegal to break and enter if you are only burgling pies. Because honestly everyone,  everyone deserves a pie,  what kind of monster thinks that they deserve a pie and someone else doesn't?   My god think of the children who have no pie.  it's in the damn constitution,  equal pie for everyone.  ( except for the bitch who made it)...

I'm too tired to fight, and can't stand the constant going without once my pies are stolen.  It's hard work,  I mean it costs money for the ingredients so we have to work, and then I have to shop, oh how I hate walmart.  Then making and cooking the pie, and the dishes oi vay!  I hate dishes.   Plus I have been making all these pies and all these people are taking them since it's legal and they deserve pies so my family hasn't actually gotten to eat a pie in months.  It seems like everyone has pie all the time, except us, no matter how many I bake.

Eventually all the other pie makers will become unhappy that they forgot what pie tastes like even if they bake 15 a day...  So slowly, one by one..  We each stop making pies.

OMG it's so awesome.   Since we stopped making pies,  I have been able to walk in and just take a pie from a stranger.  It's so awesome, so easy, and costs nothing.   WHY THE HELL HAVE I BEEN BAKING ALL THESE PIES FOR YEARS..

I was so stupid, I will never make a pie again, making pies is for pie suckers !  hahahah.  suckers...
( I hope they don't all wise up and stop,  but they probably will, because they are evil and don't care about all of us that have a right to a pie...   but I'm sure the Government will make sure we all get out pies from somewhere,  and it won't cost anyone anything.

Awesome.  I'm sure this will work out just fine.

Being smoking hot, and married.

Well well somebody is going to get lucky!


So me and my tolerant hubs stop in the local joint and grab a bowl of tepid egg drop.. blah whatever.
They give me a fortune cookie and half assedly I barely even care about opening it.  I'm that defeated.


The past few years I have noticed that fortune cookies don't really give you a fortune anymore, they just give you some  blah blah quote shit.  That's not a fortune that's a freaking phrase, quote or saying.

Also I don't want you giving those damn "lucky numbers"  because they don't have a lottery in this state so just quit reminding me I wont get a fortune and I can't even take a stab at it with a lotto ticket.


The air was sucked out of my lungs and my eyes about popped out of my head  when I saw this !

I know everyone has been hurting with the economy, but seriously I thought my ramen noodle suffrage was over when I got that Masters degree...   No one ever warned me that a major in Beer Pong wasn't all that employable.   So this is it, this is that moment,  WE ARE SO LUCKY !!!

His eyes get huge, really huge, and he spits out his wanton and looks at me and says,

Seeing the fear in his eyes and the terror in his voice,  I had to quickly redirect him, like any good wife would.  I had to save MY MAN !

I threw my non existent pride under the bus to break the tension ( like always ).

I looked him in the eye, waived the fortune cookie in front of his face, and then watched his eyes follow the fortune cookie down my cleavage and under the table in probably the sexiest move I have pulled off since the old tying the cherry stem in a knot with my tongue trick back in the day. which I am sure looks so much cooler in my memory since I was drunk

Then, channeling my best, "when Harry met Sally" spirit, I went for the Oscar.

I grabbed the table with both hands looked him in the eyes and quietly started breathing a little harder, and moaning, but just for a second.. because we've been married so long foreplay isn't something we dedicate a lot of time to,  I started alternating the "oh yeah's" and "mmm baby"  with each round getting louder.

At first he looked like he was trying to figure out if he should call 911.   Which if you know me, is pretty much the "go to" first step.  You just never know if I am an going to start flopping on the floor like a a salmon   flung out of stream by a bear.

I had to dig deep and bring more sexy..   so I brought a little throaty purr and with a sexy flick of the hair looked him in they eyes to make double sure he knew the jig and would get it.

He took his eyes off of me, and was looking behind me like Dr Who was on or something and so I turned my purr into a growl.

It was at that moment the sweet non english speaking lady that works there came from behind me with a glass of water,  put her hand on my shoulder,  motioned with her hands, the universal sign for choking, followed with the universal sign of drink water.

Which I followed with the universal sign of,  "oh yeah I'm totally freaking choking thanks so much for this water. cough cough.

Which my husband followed with the universal sign of,  ROARING LAUGHTER that made the windows shake.

My job was done...   He had totally forgotten that seconds before he was in fear for his life,

We got in the car-

him:  shakes his head giggle giggle

him: giggle giggle,   get what?

me:  the fortune duh!

him:  what are you talking about?

him: the spelling is different that's not what it meant.

me: wow. so seriously, you didn't get it?

him:  you must be so embarrassed...

Oh yeah people clearly I am still smoking hot.
Don't hate me because I'm this sexy.
Cause I am fixing to be rich bitches!