A man in rural Wisconsin wakes up one morning to find a bear on his roof.  So he looks in the yellow pages, and sure enough, there's an ad for "Up North Bear Removers."

He's got a ladder, a baseball bat, a 12-gauge shotgun, and a mean old pit  bull.

"What are you going to do?" the homeowner asks...

"I'm going to put this ladder up against the roof, then I'm going to go up there, and knock the bear off the roof with this baseball bat.  When the bear falls off the roof, the pit bull is trained to grab his testicles, and not let go.  The bear will then be subdued enough for me to put him in the cage in the  back of the van."

He then hands the shotgun to the homeowner.

"What's the shotgun for?" asks the homeowner.

"If the bear knocks me off the roof shoot dog!"


Now that's truth in advertising,  Bears and Bacon?  yeah I am this cool.

Did you notice who Obama threatened when he wasn't getting his way on raising the debt ceiling?


Now...Let this sink in really well -

He did not threaten to stop payments to illegal aliens.

He did not threaten to take frivolous benefits such as Internet access away from violent inmates.

He did not offer to fire some of the thousands of unnecessary federal employees that he hired .

He did not offer to cut down on his or his wife's frivolous gallivanting around the country and the world.

He did not threaten to not pay the senators and representatives or any of their staff.

He did not threaten to take benefits away from welfare recipients.

He did not threaten the food stamp programs.

He did not threaten to not pay foreign aid.

I hope you do too.

I am going to punch this day in the junk and run.  I am not taking any crap from one more freaking Monday.    I know how you roll you asshole.  I wrote a song already today suck on that.


It's raining it's pouring, my dalmatian is snoring,
Farting from my black lab is always super suck bad
I bumped my head, I'm nearly dead
My kid overslept then he wept when I screamed,
" IF YOU DIDN'T WATCH NETFLIX ALL FREAKING NIGHT YOU COULD HAVE GOT UP THIS MORNING!"


that will be all.


Give me your song to today.

the protector of italian virginity....

So when I back that ass up, and drop it like it's hot there is one thing on my mind.  BILF's.

DID YOU FUCKING HEAR ME?

30 Days of Thankful,  I am Thankful I am not writing that shit, I am also Thankful my husband can't lick his own balls,  this would probably lesson the amount of shit he would put up with from me from tremendous to pretty much zilch.

I really don't overtly enjoy  fucking Matt Damon.  Yes last time I "let" him get to third base while I was doing crossword puzzles he told me that Ben Afflack had a really discolored saggy ball sack and I was like, "uhm Matt, shut your freaking mouth and do your job asshole".

Also I was calling him an asshole not using asshole as a geographic location or destination, even for Matt Damon that shit is like all of the French Quarter Streets in NOLA,  ONE FREAKIN WAY. 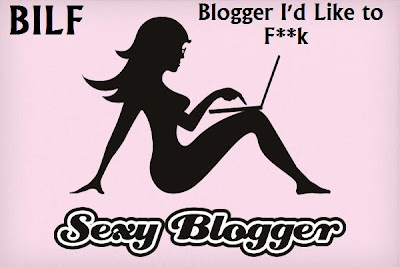 Oh yeah,  this award is kick ass, and I got it from the one the only my KBC Cobra Sister, and Bling Zing Creator Extraordinaire,  THE RECKMOSTER !!  When I say this honey got taste I mean she can tell if there is a gram of tofu hidden inside a bucket of wasabi.  The mind ninja stuff with her sometimes make me think she's in my "cloud mind community".  I know she would never commit me unless there was a scooter in it for me.  If you don't know her, and if you don't have a piece of her jewelry in your protection arsenal well, I don't know if I can even lie enough to imply I will respect you in the morning.

Ok so in a totally non gender specific listing I give you my BILF's in no specific order because that's what they say on all the reality shows.


1- Absence of Alternatives-  uh duh, awesome, what's not to freaking love, hottie photo with wigs and shit,  and IQ of Mensa and body that makes Coyote Ugly weep with envy.  you should read or be beaten in the brain area.


2- That Darling Lil Nikki from MY CYBER HOUSE RULES ! She's my sweets with the French accent.  Cute cat masks and all.  Then she became a derby queen and disappeared and blames me but it's ok because I still love her not everyone can live on a sail boat and rock it...

3-  I love a GREAT GHOST STORY,  I mean honestly,  this chick is all over twitter, facebook, and bloggyland, yet she passes within 6 miles of my house nearly every month, has lunch in the same city some days, and we were even in the same hotel for 3 days in April YET I HAVE NEVER PSYCHICALLY SEEN HER.  What does this mean?  This means, this is where you get your paranormal grove on yall.  She's a down home cajun gulf coast girl, who knows her fais do do and can throw back a beignet while slamming down a hurricane, it's the possibly intoxicated Kim from Livefromthe205


4- My possible future Daughter in Law,  Meredith from Oh That Mer!  Wait she' can't be a BILF AND  a DIL.  oh lawdy,  wait, I live in the deep south I think by law I am required to actually make a family member present on this list, with that in mind, Mer, your on the list.

5- Everyone on here is artsy, craftsty, creative, athletic, so how could I leave out THE NEXT MARTHA, from THE MARTHA PROJECT,  I can't believe Martha Stewart hasn't attempted to shank this babe with her bedazzeled shiv hand carved by Tibetan monks from the femur of an Egyptian Llama,  but even if she tried she would fail, because MY Martha, the next Martha would heave a freaking empty liquor bottle at her and knock her ass out.  YO!


This was hard, I want you to know everyone on The Reckmonsters lists were also on mine because she stole them from my brain ahead of me so I couldn't pick them too, that is all, other than the fact that the guy playing the new Conan is currently making me Pumpkin cheesecake and he's using a whisk while he is naked.  Nice visual right?  yeah YOU. ARE. WELCOME.

As usual I am forever in awe of you flipping amazing people.  I bow to the power of social media and my rocking friends.

Last week I sent out a request that you guys, near and far, help me, help my little itty bitty local gulf coast animal shelter. My itty bitty teeny weenie local shelter that has helped so many and went above and beyond for not only our local community but the entire state and accompanying states time and time again after repeated disasters was in a contest.

They of course were the "underdog"  ( ha get the pun, animal shelter - under dog?)  because they were going against the entire world in a grant contest hosted by the ASPCA.  To say my area is a tad behind on the technology curve would be like saying, " I may be a tad wordy".

We were up against huge metropolitan areas, with huge populations that possessed crazy things like ipads and smart phones and lap tops and more than 1 email address and something faster than dial up. So I turned to you guys for a little push.

We came in 3rd place and my little shelter won a 25k grant from the ASPCA, now normally I am a first place or nothing kind of girl, but honestly I could not be more proud of you guys or more happy for my shelter. They do so much with so little for so many.

So many paws and meows will have better lives thanks to you guys.