Are you shitting me?


Have you ever wondered who uttered the phrase, "You gotta' be shittin me" the very first time? 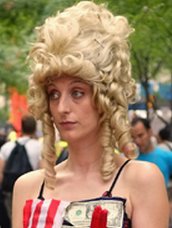 Well, it just so happens to have originated through the Father of Our country, way back when George Washington was crossing the Delaware river with his troops.

There were 33 (remember this number) in Washington's boat. It was
Extremely dark and storming furiously and the water was tossing them about.

Finally, Washington grabbed Corporal Cox and stationed him at the front of the boat with a lantern. He ordered him to keep swinging it, so they could see where they were heading.

Then a big gust of wind and a wave hit and threw Corporal Cox and his lantern into the Delaware. Washington and his troops searched for nearly an hour trying to find Corporal Cox, but to no avail. All of them felt terrible, for the Corporal had been one of their favorites.

Sometime later, Washington and his troops landed on the other side, wet and totally exhausted. He rallied the troops and told them that they must go on.

Another hour later, one of his men said, 'General, I see lights ahead.'
They trudged toward the lights and came upon a huge house.

What they didn't know was that this was a house of ill repute, hidden in the forest to serve all who came.

General Washington pounded on the door, his men crowding around him.

The door swung open, and much to his surprise stood a beautiful woman.

A huge smile came across her face to see so many men standing there.

Washington was the first to speak, 'Madam, I am General George Washington and these are my men. We are tired, wet, exhausted, and desperately need warmth and comfort.'

Again, the Madam looked at all the men standing there, and with a broad smile on her face, said, 'Well, General, you have come to the right place.
We can surely give you warmth and comfort. How many men do you have?'

Washington replied, 'Well, Madam, there are 32 of us without Cox.’

And the Madam said, 'You gotta be shittin me"