THE FACTS I WILL REVEAL IN THIS SERIES WILL GET ME
COMMITTED,  PICKED UP BY HOMELAND SECURITY
IN THE HISTORY BOOKS
AT LEAST UNTIL THE EARTH ENDS.
PART 3 OF THE MOST FUCKED UP  IMPORTANT SHIT YOU WILL EVER READ MAYBE!
As I revealed to you on Monday only me, (click here) Tom Hanks and Mel Gibson know the truth.  I am choosing to share it with you sans the stuffed beaver or best friend soccer ball head.
I have spent   minutes,  hours, weeks, months,  years  researching the topic I am about to present you with and find that the following series will be the most fictitious conclusive argumentative  Scientific Study I have brought to you in at least a couple days, EVER.   The New York Times would  describes it as "Earth Shattering" and Wall Street Journal would say, " most enlightening series known to mankind."  if they were  tripping on LSD and buried in an under ground bunker with the only escape being writing what I say, they would probably have said that.
Just like a mommy logger giving away a $1.00 off coupon for huggies  first class national news programs.  I have the kind of dedicated dogs staff that will come through when it counts. This "BREAKING NEWS GRAPHIC"  should appear on your screen every 15 minutes as we flood you with utter speculation and misinformation  nothing but the facts. 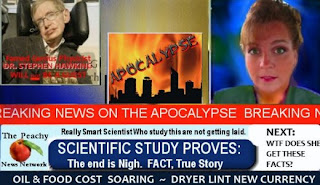 A lot of credit is being given to the Mayan Calendar and Millions of Dollars are being spent to study it, why it ends when it does and what it means.
Some really smart Scientist Guys ( code for dudes who don't get laid EVER) have determined that it's based on their 2600 year cycle and December 21 2012 will be the birth of a new era and that birth is bloody and painful. ( clearly they have NEVER seen the Orgasmic births on YouTube.  I really do wish I could scrub that from my memory.)
My staff ( dogs)  did dug freaking holes all over my yard  an actual archeological dig and found stone tablets that clearly were the original version of Dilbert.  It also highlights the social and political climate of the culture at time. That's the  mystery behind they Mayan Calendar. Now you know.

Of course now I have to go look at the orgasmic births on youtube. Why? Why did you put that in my head?

Peach. You absolutely crack me up. All this time I thought this calendar dealie was an alien issue. When the alien who taught calendar making got disciple to the year 2012, the same aliens who taught the Mayans to build pyramids packed their bags and left for a visit to the next world they wanted to fuck with.

Thanks for the clarity.

How can you mention "Orgasmic births" and not leave a link? Love the drawings Peach. Soon to be unemployed Mayans have a lot to look forward to. And it's nice to know the world isn't really going to go tits up just yet.