~WARNING~THE APOCALYPSE IS NIGH! BREAKING NEWS !

THE FACTS I WILL REVEAL IN THIS SERIES WILL GET ME
COMMITTED,  PICKED UP BY HOMELAND SECURITY
IN THE HISTORY BOOKS
AT LEAST UNTIL THE EARTH ENDS.
I have spent   minutes,  hours, weeks, months,  years  researching the topic I am about to present you with and find that the following series will be the most fictitious conclusive argumentative  Scientific Study I have brought to you in at least a couple days, EVER.   The New York Times would  describes it as "Earth Shattering" and Wall Street Journal would say, " most enlightening series known to mankind."  if they were  tripping on LSD and buried in an under ground bunker with the only escape being writing what I say, they would probably have said that.

Just like a mommy logger giving away a $1.00 off coupon for huggies  first class national news programs.  I have the kind of dedicated dogs staff that will come through when it counts. This "BREAKING NEWS GRAPHIC"  should appear on your screen every 15 minutes as we flood you with utter speculation and misinformation  nothing but the facts. 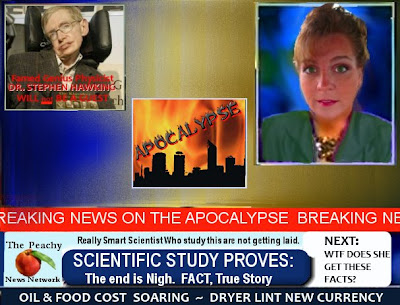 This scientific study is a multi part series and it will cover nothing of any real importance EVERYTHING.
It will contain so much bullshit imperative information that it will need to cross over to my other blog " Being Peachy".  Which means this week you will need to read both blogs so  you can, see what a total fucking idiot I really am,  be more informed and prepared. Not that it will even remotely help.
The series is broken down into bite sized dollops of  rancid  kempchi  separate points and post so that it is easier to read without vomiting,  comprehend.
Here's what you have to look forward to in this
FREAKING AWESOME
APOCALYPTIC SERIES
Now you have a basic glimpse into what is coming at you.  Will you chose the red pill or blue pill?
Remember ONLY you can prevent forest fires.  Shit that is the wrong tag line, where is my damn speech writer?
XO
PEACH OUT
* now after you leave your comment head over to  www.beingpeachy.com  and catch the clarification of the entire Mayan Calendar issue.
Also this is an actual movie on Netflix that my husband and friend watched when I got drunk and passed out. 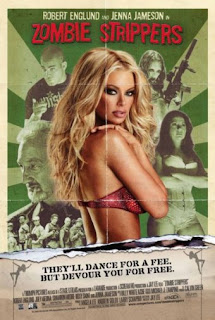 Hey, why the Hell am I in the Black Hole category? I've gotta start remembering to close the blinds.

Can you please pass me some zombie strippers. I could use a little action.

Screw the red and blue pills, I am taking the purple. I want to die with a raging hard on.

HAH! I partied with Tommy Lee for a whole 24 hours once. He was sweet, but he's no Major Earth Event.

And btw the word verification I'm getting below is "toker". How appropriate.

Science made sexy. Bill and Melinda Gates should hire you for their foundation!

p.s. Thanks for the DVD idea. I know what to get my husband for V day now. V stands for...

I thought "Zombie Strippers" was a great "b" movie..well maybe a "c"...
I am looking forward to your explanation of the Bird Flu..and how its gonna keel us all..

OT, it was nothing special. Psst, viagra is blue.

By the way, I need to get in on this "end of the world" shit because I have a few people on my hit list and I want to have the satisfaction of blowing their brains out before I explode into nothing.

By blowing, I don't mean murdering.

The world can be blown to bits, infected by flesh eating diseases such as the Bieber Fever or sucked into giant black holes like the Octomom.
Don't care. What matters is that being torn to little naughty bits by Jenna Jameson zombie minions is an option and choice.
So thanks, life can go on, or not as long as Netflix is still working when all this goes down.

According to the Tralfamadorians, the Earth always ends, always has, always will.

I fear that by putting Jenna at the bottom of this post you ADD hormone deranged folks are forgetting to go and read the actual MAYAN CALENDAR SECRETS REVEALED post on BeingPeachy. It's like Dilbert but in Mayan.
http://www.beingpeachy.com/2011/01/31/scientific-studies-mayans-moronic-monday/

I'm already confused...who's black hole are we in?